While an army soldier was headed toward a full recovery from a back injury in Harford County, Maryland this past September, several hundred miles away, a young pup and her human were headed away from the North Carolina coast. Hurricane Florence was coming in fast, and 11-month-old Autumn and her owner were forced to evacuate and head to Bel Air, MD, where family was waiting to take them in.

Unfortunately, due to unforeseen circumstances, Autumn’s caretaker had to make the extremely difficult decision to part ways with his dog, and he brought Autumn to the Humane Society of Harford County (HSHC).

“Autumn was loved and very well taken care of,” said Cat Kelly, HSHC’s shelter operations director. “It was obviously a very hard choice for her owner to make, but circumstances just didn’t allow for them to stay together.”

Autumn had been through this before. She had been adopted as a 6-month-old puppy from a shelter in North Carolina and thought her days in a shelter were over.

Life as a Vet Tech in the Army

Stacey is an active duty army soldier who is also a proud veterinary technician with a very noble purpose. “Many people outside of the army are unaware that this type of job exists,” she explains. “My main mission is to care for working dogs in the military – those who deploy and go down range [overseas] with their handlers and other soldiers.”

Stacey says she was inspired to join the army by her father who also served his country. “I am proud to be in an occupation that only makes up less than 1% of the population!”

But a back injury and long recovery sidelined Stacey this past fall. She said that for months during her recovery, she was limited in what she could do and ther 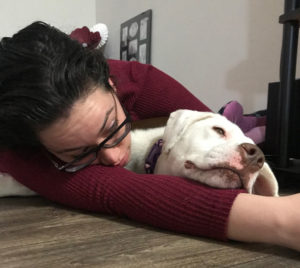 efore, wasn’t able to do anything fun outside of her home. “I knew that adopting a dog in need would motivate me to get out of the house and would improve my overall well-being.”

So Stacey started her search for a new companion on HSHC’s website at www.harfordshelter.org. That’s where she learned about the Pets for Patriots program.

Pets for Patriots, Inc. is a registered 501(c)3 charitable organization dedicated to helping United States military personnel and veterans adopt a new pet friend while giving the most overlooked shelter dogs and cats hope and a home.

After being accepted into the Pets for Patriots program, a

free process that took just a few days, Stacey’s first order of business was visiting HSHC. She walked into the kennel area and started looking over the available dogs, pausing to read about them on their kennel cards.

Stacey stopped when she reached Autumn’s kennel. “The very first time I saw Autumn, I just knew she was my dog,” she said. “I asked to meet Autumn because I saw a scared and sad puppy with big, beautiful, honey eyes who spent a quarter of her puppy life in a shelter. I knew that if I got her, I would make the rest of her puppy life as awesome as it could be.”

The Waiting is the Hardest Part

But unfortunately, Stacey and her husband couldn’t take Autumn home right away. The shelter was treating Autumn for ringworm. Ringworm is a fungal infection that grows and lives in the outermost layers of the skin and in the hair follicles. It is highly contagious to other animals and people. Although relatively easy to treat with topical and oral medications, the time it takes to get the “all clear” can be anywhere from weeks to months.

“We waited and waited. I called and emailed every single day inquiring about her, but she was never ready. Finally a month later, we went back to the shelter to try our luck and she was available for adoption!”

The days and weeks of suspense and anticipation washed over Stacey as she filled out the paperwork.

“Meeting her was something I’ll never forget because it was a very emotional ordeal for me knowing that I had fought so hard for this pup and that she was finally mine.”

Nothing But Sunny Skies Ahead

Six weeks after adopting her and making her a part of the family, Stacey says Autumn was well worth the wait. “She has changed my life immensely just by having her to care for. She brings so much joy to my husband and I, and she’s amazingly smart.”

Stacey just gushes with enthusiasm about Autumn and has nothing but positive things to say about her. “Autumn’s favorite things to do are being next to me at all times, playing with any type of toy you give her (especially squeaky toys), and long car rides,” Stacey remarks. “She loves children, especially babies, a

Although she will likely always have some back pain, the worst is over and Stacey sees nothing but blue skies in her future.

“Autumn has allowed me to see life for the better. I know she is just as thankful for me rescuing her because of the greeting I receive from her when I get home and come through the door.” 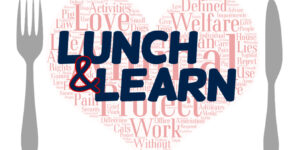 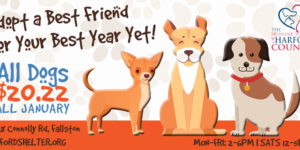