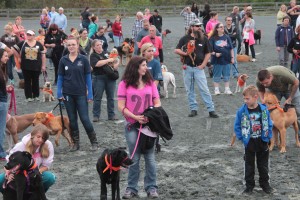 Fallston, MD (March 13, 2014) – With an massive sense of excitement in the air, 200 dogs and the people who love them came together at the Harford County Equestrian Center in Bel Air on Saturday, October 12, 2013 to set a new Guinness World Records(R) title by holding the world’s largest gathering of dogs wearing the same bandana in one location. Official confirmation of the record came in an email from Guinness officials on Monday, March 4, 2014.

The attempt was organized by the Humane Society of Harford County (HSHC) as part of their annual Walk & Wag-a-Thon and Pet Fair fundraiser to raise funds for and awareness of pet homelessness. The Walk & Wag-a-Thon and Pet Fair is the largest event of its kind in Harford County. This annual fall festival is a fun-filled experience for pets and pet parents alike with pet contests, raffles, vendor displays, food and music and more.

“We wanted to do something unique to involve the Harford County community and spread awareness of pet homelessness in the area,” said Mary Leavens, executive director. “The Guinness World Record attempt was exciting, and what made it even more special was the crowd of dogs who joined us who were absolutely perfect canine citizens. We have an amazing animal-loving community who helped us set a new world record!” 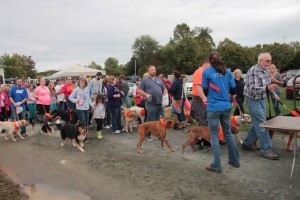 Guinness has very stringent procedures for qualification, so cooperation among participants was vital. HSHC wishes to recognize its many supporters who helped achieve the record by registering each canine friend, standing with their pet in their appointed line, and waiting for the required timeframe while volunteer stewards physically counted the number of canine participants. Two independent witnesses – Harford County Sheriff Jesse Bane and Jean Matteu from Frank Hajek & Associates, P.A. – directly observed the proceedings and signed official statements for Guinness officials. Mid-way through the attempt, a remote controlled helicopter flew overhead and took aerial photos of the event.

People who participated in setting the record can share in the excitement by purchasing their very own official Guinness World Records Certificate of Participation by contacting HSHC’s Nicky Wetzelberger at 410-836-1090, x104 or nicky@harfordshelter.org.

The official confirmation of the record can be viewed at http://www.guinnessworldrecords.com/world-records/9000/most-dogs-wearing-bandanas.

About Guinness World Records
Guinness World Records aims to inspire ordinary people to do extraordinary things. Their mission is to gather all fans and friends of record-breaking around the world together, share as many superlative facts and feats as possible with them, and assist them in realizing their dream of becoming a world record holder! The company maintains a website at www.guinnessworldrecords.com.

About the Humane Society of Harford County
The Humane Society of Harford County, Inc., is a non-profit, 501(c)(3) charitable organization dedicated to the welfare and well-being of the approximately 4,500 animals that come to us each year. We promote the kind treatment of homeless, stray and abandoned animals by providing shelter, care, adoptions, and community education. We are not a county agency nor are we affiliated with any national or regional organization. Your tax-deductible donations, bequests, and proceeds from events are crucial to our life-saving efforts on behalf of the animals of our community. 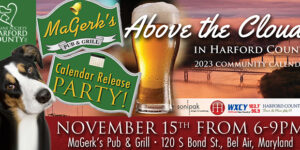 Above the Clouds in Harford County 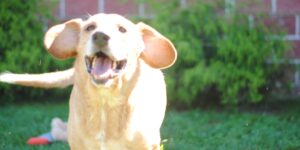 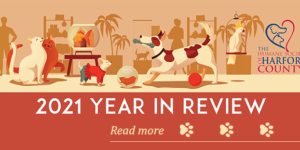 The Humane Society of Harford County’s 2021 Year in Review