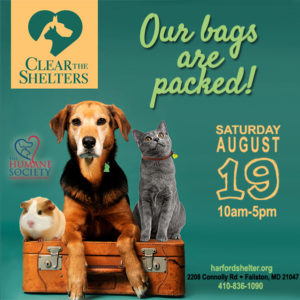 Fallston, MD (August 16, 2017) – The Humane Society of Harford County (HSHC) will join hundreds of animal shelters – 888 to be exact – in 20 states, Washington, D.C. and Puerto Rico on Saturday, August 19 as part of a one-day, nationwide pet adoption drive called Clear the Shelters. Adoption fees on all shelter pets will be waived with hopes that every animal will find a loving, permanent home.

“Almost 4,000 animals enter our shelter every year, including cats, dogs, rabbits and guinea pigs, ferrets, birds, reptiles, and farm animals,” said Cat Kelly, shelter operations director at HSHC. “We’re very excited to join shelters all across the country who will be opening their doors wide to find homes for thousands of pets this Saturday. We want to open for business on Sunday with little or no animals left!”

HSHC will be open from 10am until 5pm on Saturday. Interested adopters can view the animals’ photos and biographies and download an adoption application in advance. Regular adoption procedures will apply, and because of the urgency to clear the shelter, animals will not be put on hold for adoption at a later date. Although adoption fees are waived, there is a required $50 deposit for a HASP (Harford Animal Sterilization Program) certificate if the animal is not already spayed or neutered. That fee is refunded upon completion of the procedure within 60 days.

The one-day event has been gaining traction since it launched in 2015. More than 53,000 pets were adopted during last year’s event, and in total, Clear the Shelters has resulted in more than 70,000 pet adoptions nationwide.

“Last year we had folks lining up at 7:30 in the morning for our 10am opening,” said Jen Swanson, executive director at HSHC. “At the end of the day, 62 animals had been placed into adoptive homes, and many more people came back to adopt in the days following Clear the Shelters.”

About Clear the Shelters
HSHC will participate as an official Clear the Shelters partner alongside NBC4, the local news affiliate in Washington, DC. This year’s Clear the Shelters event comes after last year’s highly successful inaugural effort, which resulted in nearly 20,000 pets finding new homes through a partnership between the NBC Universal Owned Television Stations and hundreds of animal shelters in the U.S. and Puerto Rico. The nationwide day of action literally emptied dozens of animal shelters across the country and inspired local communities to take action and open their homes to animals in need. Visit www.cleartheshelters.com for the full list of local participating animal shelters and to view a real-time pet “Adoption Tracker” on August 19.

About the Humane Society of Harford County
The Humane Society of Harford County, Inc., is a non-profit, 501(c)(3) charitable organization dedicated to the welfare and well-being of the approximately 4,500 animals that come to us each year. We promote the kind treatment of homeless, stray and abandoned animals by providing shelter, care, adoptions, and community education. We are not a county agency nor are we affiliated with any national or regional organization. Your tax-deductible donations, bequests, and proceeds from events are crucial to our life-saving efforts on behalf of the animals of our community. 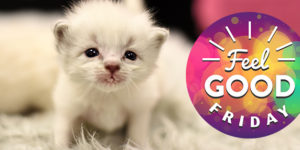 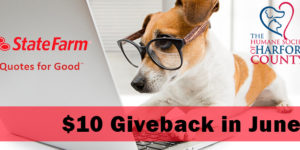 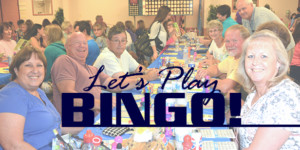